Last Saturday at Gunderson’s Bar (newly remodeled and looking great!) was so fun. It was St. Patty’s Day and the usual attendance for The Grassroots Comedy Tour was nearly doubled.  Extra chairs needed to be brought in and some customers were standing.

Last Thursday night was the 10th Anniversary of live comedy at Clete & Connies Bar in Oelwein, Iowa.  It’s a corner bar that most would dismiss as a gem for live comedy.  But they put in the effort to properly promote and present the show.  The audience is a loyal group of die-hard regulars as well as new patrons and some people just in off the street.

It holds only 50 or 60 MAX, and that’s probably breaking a fire marshal code.  And the intimacy allows for a high level of improv.  The familiarity between audience and performer creates an atmosphere that’s more like a party than a comedy show.

Last Thursday night, the party was dominated by JagerBombs.  And you know how THAT STORY always ends…

… With your co-stars taking selfies with you while you’re passed out in the bar at last call. 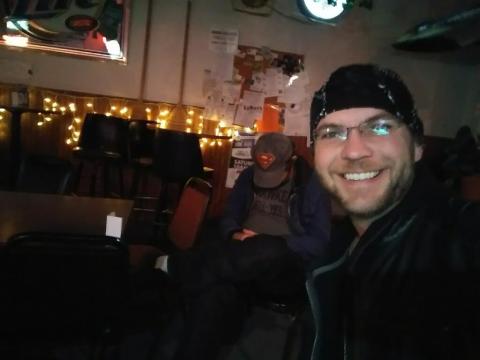 So the BAD NEWS is…  It’s the end of an era for JerDog.

But just as one chapter ends, a new one begins.

For months, the people have demanded that Katrina Brown and I do a podcast. Well, we finally got our shit together and made it happen. HIT THIS LINK

Every day is a new question from our live Q &A in The He Said She Said Comedy Show.

This is going to be fun.